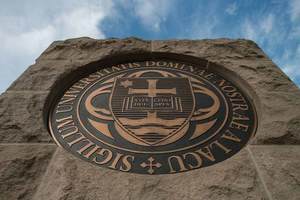 Since its founding by Rev. Edward F. Sorin, C.S.C., on November 26, 1842, the University of Notre Dame has sought to be at the center of Catholic intellectual life. Notre Dame’s Catholic character informs its every endeavor: from the nature of the education it offers, to the kinds of discussions and inquiries that take place at the University, to its service to the Church.

— STATUTES OF THE UNIVERSITY

This report provides a small sampling of the research, teaching, and service occurring on campus and around the world to fulfill the mission of Notre Dame and the expectations of Catholic universities that have been articulated by the Church. These expectations took form in an apostolic exhortation issued by Pope John Paul II in 1990, titled Ex Corde Ecclesiae. The exhortation was adopted by Catholic bishops in the United States in 1999, and states four attributes that comprise Catholic identity at an institution such as Notre Dame:

The following is not an exhaustive listing of every way in which the University maintains its Catholic character; it would be impossible to detail everything Our Lady’s University has done, is doing, and will do. Rather, the Report provides a small sampling of the good work people are doing across campus and around the world to ful ll Pope John Paul II’s vision for Catholic institutions of higher learning and Father Sorin’s vision for Notre Dame.

Learn more about Our Catholic Mission